Why are the numbers of people homeless at record level and what can be done to stop further increases?

The latest official homeless figures show that there were 10,568 individuals in emergency homeless accommodation at the end of July- the highest number of people officially homeless since records began in 2014.  This time last year, 8,132 people were being accommodated in emergency accommodation, the latest figures show that number of individuals in homelessness is 30% higher than the same time last year. Family homelessness has more than doubled.[1]

The real number of people who have no home is no doubt considerably higher as local authorities across the country are reporting that every emergency bed is full, and people are being asked to stay temporarily in unsuitable circumstances while new shelters are being commissioned.

This is a stark and worrying increase and demonstrates how quickly a situation can change. The return to pre-pandemic levels of homelessness is extremely disappointing and very concerning given the successes that were achieved at the height of the pandemic when renters were protected from eviction and  huge efforts were made to move people out of homeless emergency accommodation with an urgency rarely seen before.

The emergency rental protections that were in place on and off from March 2020 to April 2021 in response to the Covid-19 public health emergency were lifted in April 2021 and evictions began taking place again. The lifting of the moratorium on evictions coincided with slight month-on-month increases in the total number of people in homelessness from May 2021 onwards, however, the number of people in emergency homeless accommodation has been increasing even quicker since the beginning of 2022.

Why are the numbers of people homeless increasing? 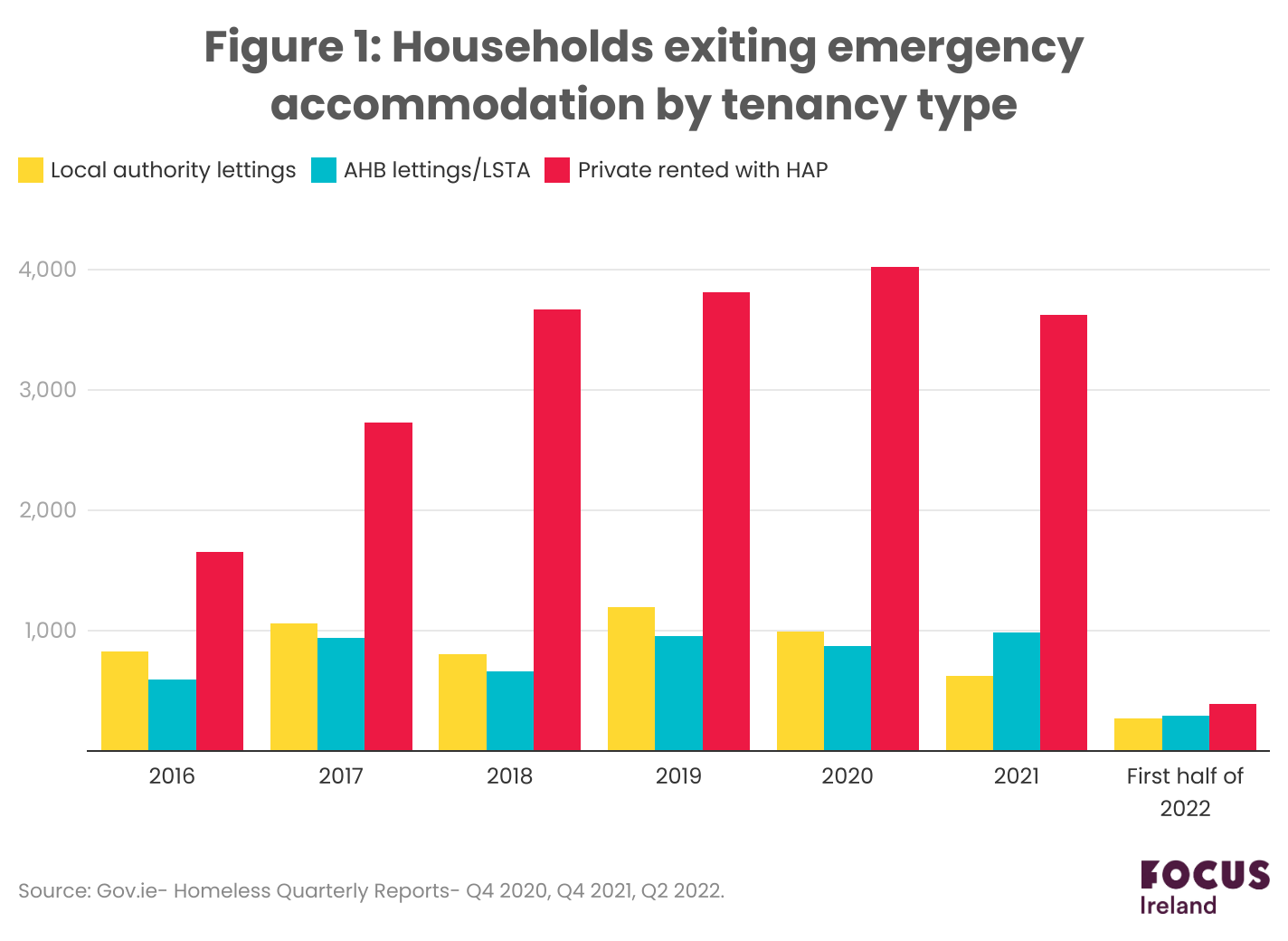 The main reason for the decrease in exits from homelessness is the shortage of private rental accommodation, specifically using HAP, which has heavily been relied on in recent years, making up between 60-70% of exits between 2016-2021.  The number of people leaving homelessness for a HAP tenancy in the first half of 2022 was just 20% of the number able to take the same route last year. 394 households exited homelessness using HAP in the first half of 2022, compared with 2,000 households in the first half of 2021.[3] A recent analysis by Simon Communities of Ireland of properties available for rent within HAP rental limits shows that there has been a stark decline in the number of affordable rental properties which is making moving out of homelessness near impossible. Reluctance of landlords to accept HAP tenants also makes it increasingly difficult for people looking to rent what little housing is available with the social housing support. The limited route out of homelessness, combined with new households presenting to homeless services, is driving up the total numbers in emergency homeless accommodation.

Rise in number of pending evictions in 2022

Since the rental protections were lifted in April 2021, there was a significant increase in the number of pending evictions.  Data from the RTB, as shown in Figure 2, shows that in Q2 2022 the number of NoTs issued was 98% higher compared to the same quarter last year. The underlying reason for the increase in evictions taking place points to a concerning trend. In Q1 2020, 50% of landlords stated that their reason for eviction was intention to sell, however, this has now increased to 61% in Q2 2022.[4] So, not only are evictions increasing, the number of rental properties available to rent is also reducing which will make it even more difficult for people to avoid entering, and to leave, homeless emergency accommodation. 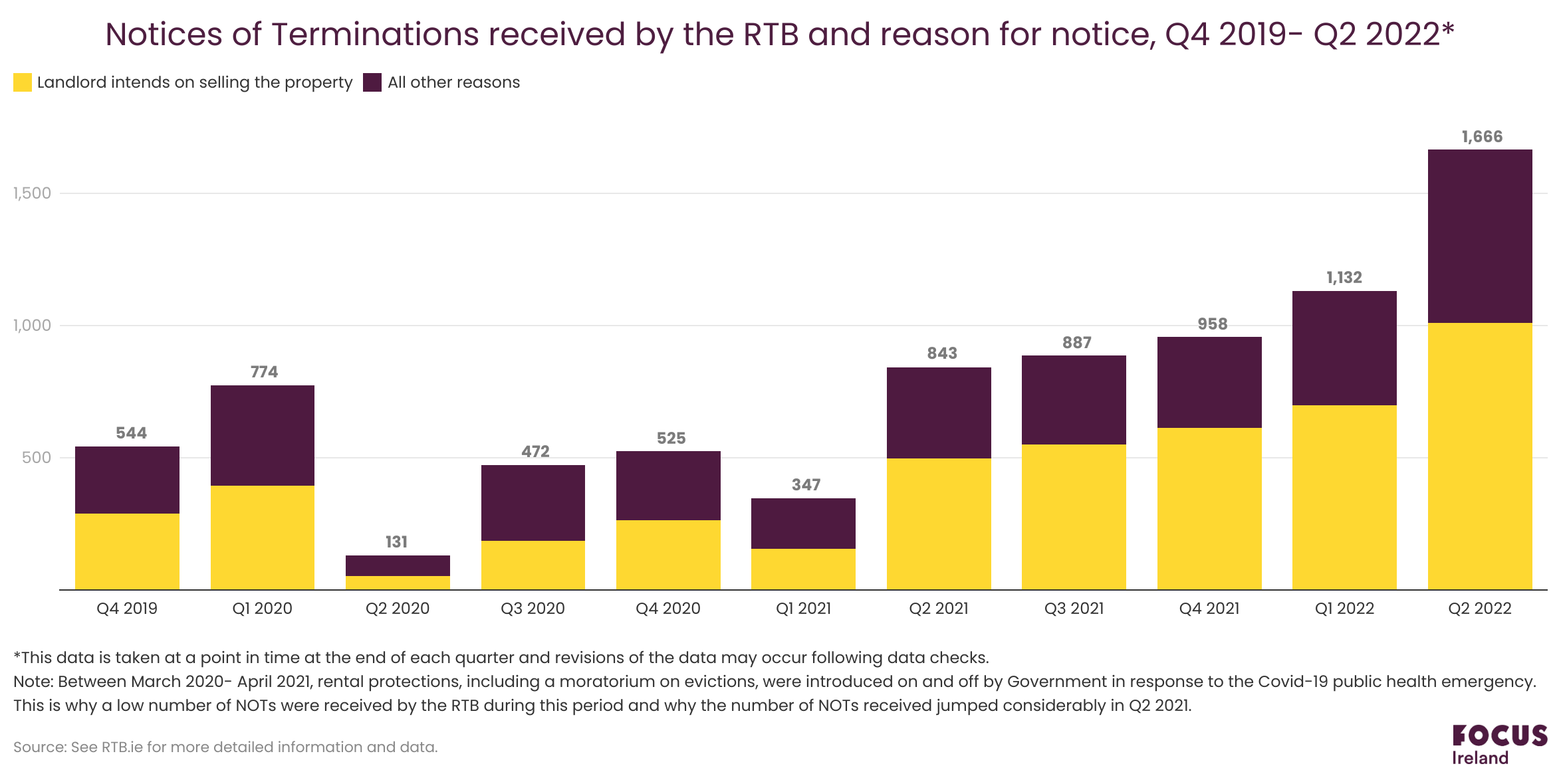 What is different now compared to the previous record level?

Figure 3 demonstrates the different make up of households now compared to when there was a previous record number of people homeless in October 2019, compared to the new record just set. This shows that single adult homelessness has never stopped growing, even when the pandemic rental protections were in place and that family homelessness had started to plateau from 2018, decreased at the beginning of the pandemic, and started increasing again from mid-2021. What is more challenging about the current situation compared to the previous 2019 peak is that while the number of individuals is similar, the number of households in homelessness is greater because there are more adult-only households. This means that we will need more housing if we are to reduce this number. 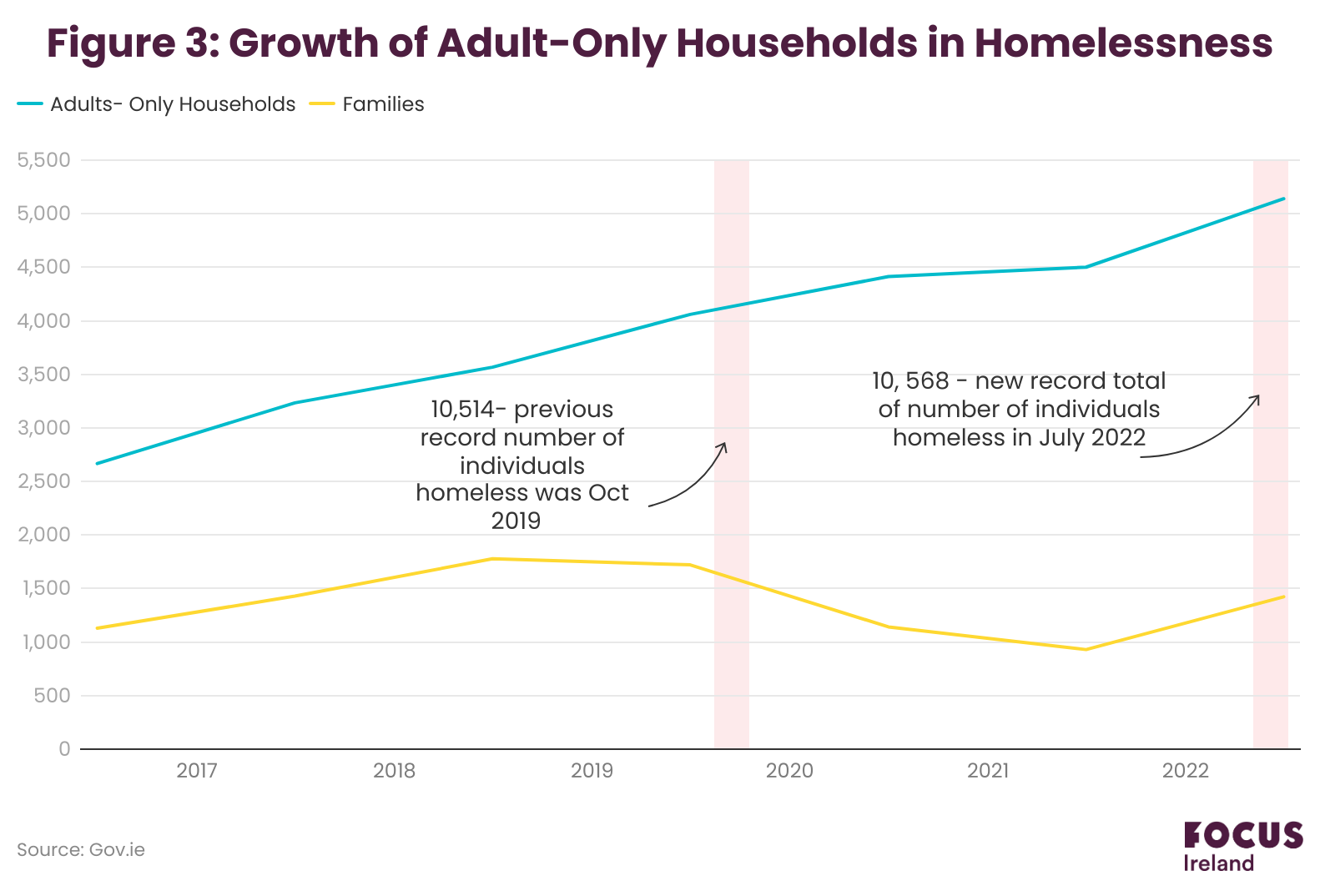 What measures can help prevent further rises in homelessness?

A further rise in homelessness is not inevitable and a combination of immediate and long-term targeted measures need to be introduced now if we are to stop homeless from rising further and if we are to deliver on our European commitment of ending long-term homelessness by 2030.

‘From Rebuilding Ireland to Housing for All: international and Irish lessons for tackling homelessness’ was launched in September this year, receiving widespread positive coverage. Here we asked the lead researcher, Professor Nicholas Pleace of York University,  to write a guest blog, setting out the main conclusions from the project.

While Covid-19 supended life as know it in 2020, this global disaster has been slowly but surely subsiding. With the roll-out of new vaccines, economies, and societies, have reopened. However, one of the more problematic issues pre-Covid, the use of emergency accommodation to house people experiencing homelessness, is again being used at a much higher rate in the last year.

Why are the numbers of people homeless at record level and what can be done to stop further increases?

With homelessness reaching a new record level in July, this blog looks at why homelessness has risen by 30% in the last year and what immediate and long-term actions must be taken now if we are to stop homeless from rising further.

In recognition of UN International Youth Day, this blog will highlight the risks faced by certain young people in terms of homelessness and housing insecurity, and the supports and services Focus Ireland is providing to address them.